When visiting Amazulu Lodge St Lucia you are spoiled with a range of ecosystems that are diverse, bringing an abundant spread of leisure options in a region that includes Big 5 game reserves. Sprawling beaches and dense forests. Explore the elephant coast where you will find long stretches of beaches fringed with unspoilt coastal forests. In the Tembe Elephant Park you will a rare sand forest with bleached white sand that harks back to the ancient seabed it once was, reminding you that the elephant coast is a unique place. In addition to the unusual sand forest. There are Lala Palms, Curry bushes, Toad and Pod Mahogany trees. The Kwazulu-Cape coastal forest mosaic is a subtropical moist broadleaf forest ecoregion of South Africa.
The Kwazulu-Cape coastal forest mosaic occupies the humid coastal strip between the Indian and the foothills of the Drakensberg mountains. It is part of a strip of moist coastal forests that extend along Africa’s Indian Ocean coast from southern Somalia to South Africa. The northern limit of the ecoregion is at Cape St. Lucia in KwaZulu Natal, where the forests transition to the Maputaland coastal forest mosaic. The southern limit is at Cape St. Francis, east of Port Elizabeth in the Eastern Cape Province, where the KwaZulu-Cape forests transition to the Knysna-Amatole montane forests.
The ecoregion has a seasonally moist subtropical climate. Rainfall ranges from 1500 mm to 900 mm per year. The northern portion is generally receives more rainfall, typically in the summer months, while the southern portion receives most of its rainfall in the winter months, which is typical of the Mediterranean climate region to the west. Rainfall diminishes away from the coast, and the coastal forest mosaic yields to the drier Maputaland-Pondoland bushland and thickets in the Drakensberg foothills, above 300 to 450 meters elevation.
The ecoregion comprises a mosaic of different plant communities, including coastal belt forest, sand forest, and dune forest, short, dry forests known as Alexandria forest, grasslands, palm woodlands, and thorn scrublands. Forests are typically made up of evergreen trees, interspersed with dry-season semi-deciduous and deciduous trees. 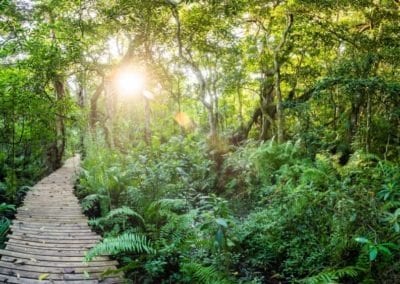