We show you why the St. Lucia Wetland Park has been given this international status. Join us on a full day, off-road exploration of this pristine (Eastern Shores) area – includes an ecological overview of the area, wonderful game-viewing, bird-watching, short walks and a visit to Cape Vidal with snorkeling and whale-watching in season. Learn more about the five eco-systems that make up this unique park. Experience the Bush, Forest and Beach all in one day! Full braai (barbecue) lunch, snorkeling gear and drinks included.

The park is situated in the northeast coast of KwaZulu-Natal in the kingdom of the Zulu.

With a surface of 328000 hectare and an impressive 280km long coastline the park is considered the third-largest in South Africa.

Five eco systems packed tightly together in a small area warranting the status of World Heritage Site. The marinesystem in the east stretching west to some of the highest vegetated sand dune forests in the world to the largest esturine system in Africa, to grasslands, bushlands and in the north huge swamp marsh and papyrus reed areas.

The combination of these systems is so unique in the world waranting this world heritage status.

iSimangaliso starts south of the St Lucia estuary mouth and reaches up north to Mozambique.

The St Lucia Estuary and Lake St Lucia are the home of the biggest population of croc’s and hippo’s in South Africa. The last count of 2500 crocodile’s larger then 1.5 metres and 1500 hippo’s, 140 Species of salt and fresh water fish, many of which use the estuary as a nursary and breeding ground.

The worldwide threatened Leatherback turtle’s ( see picture below) swim thousands of miles to lay their eggs on our titanium rich dunes and golden beaches.

Numorous numbers of whales are sited off our coast during our winter months making us the home of the big six. Whale watching tours are very popular with sitings of mostly the southern hump back whale and less of other species, minkies southern write etc. An abundance of dolphin and other sealife can also be seen.

For the bird lover there are 500+ species of birds. 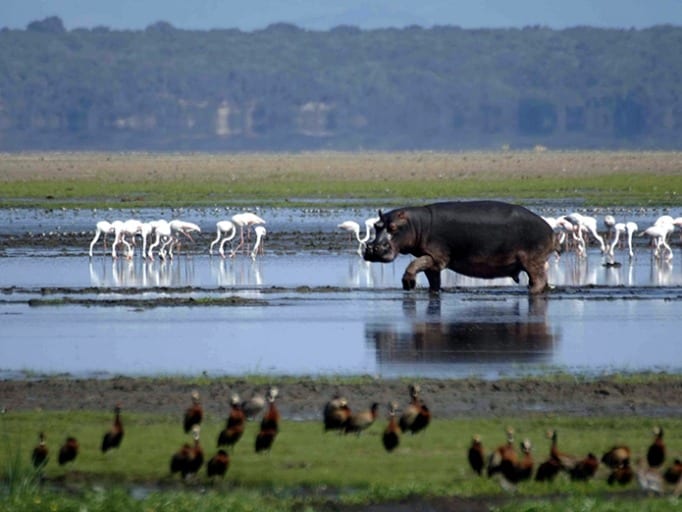